1) This friday the ASC will be having a meeting with Mark Fitzpatrick where he will speak about all the 3D programs provided on campus and give a tutorial on 3ds Max! This is definitely a meeting not to be missed!

2) Alumni and Family Weekend is this coming Saturday and we'll be launching our ASC Cow creation off a trebuchet! The launch starts at 1pm on N 9th Street! 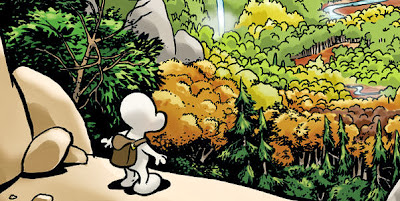 This week many of us attended the Jeff Smith guest speak at the CCAD Mix! Jeff Smith, well known for his works Bone and RASL, gave a run down on his work and background with animation and comics. He spoke a lot about his influences as a child, which ranged from Carl Barks Scrooge McDuck to Walt Kelly's Pogo; gave a nod to his new web comic series Tüki Save the Humans, and answered questions from everyone in the audience. There was even a nice book signing after the talk where he sketched a character for every fan that came up.

For anyone wanting notes from his talk you can either email the ASC email or come up and ask one of the leaders!

After the Jeff Smith talk a few of our members helped in making a paper mache cow for the upcoming Alumni and Family Weekend trebuchet launch! There were definitely a lot of laughs to be had while making it and we're very happy many of you came by to help!

See you all next week!
Posted by The Animation Student Collective at 8:39 PM