1) This Friday artist Jeff Smith will be on campus to talk about his work during the 2013 CCAD Mix. The event for Jeff is free and starts at 7 pm in the Canzani Center auditorium.  More news on the Mix can be found here for those of you who would like to purchase tickets to see other artists.

2) Also this Friday, after the Jeff Smith talk, we will have a get together to work on paper mache cows for the upcoming trebuchet launch. There will be snacks and fun to be had while crafting cows and other paper mache creations to launch, so stop by and give a helping hand if you're interested! 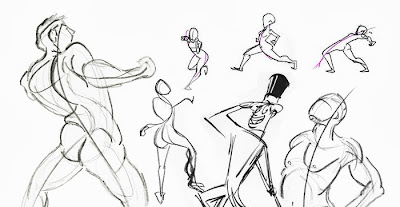 This week in the collective we all showed off our acting skills and took center stage so that some gesture drawings could be made and learned to model rabbits and our mascot, Ace!

In room 308 the basics of gesture drawing were covered, including line of action, exaggeration, silhouette, and character based gestures. Everyone had loads of fun drawing out various scenarios such as an elephant and wolf on the catwalk, a coach yelling at football players, and even some amazing matrix styled poses! In room 304 everyone was given a taste of modeling in 3D! New members were toured through the various 3D programs at school for modeling and then given the challenge of making a rabbit! Afterwards, everyone then started making a model of our mascot, Ace, which could possibly be made into a chocolate mold! There was definitely much fun had in both the 3D and 2D specific meetings!

See you all next week!
Posted by The Animation Student Collective at 6:28 PM